When you think of going on a honeymoon, you think of cage diving with sharks, right? Probably not, but that was at the top of our list for our visit to South Africa.

We arrived in Cape Town late one night, and the very next morning we hit the ground running and ventured out to Gansbaai to swim with sharks. We used Marine Dynamics Shark Tours and had a great experience.

During our briefing, we were informed that Great White Shark sightings were becoming few and far between in Gansbaai due to Orca attacks. The killer whales have started attacking Great Whites in the area and eating their livers. As a result, fewer Great White sharks are being found in Shark Alley in Gansbaai and it was unlikely we would see one on our dive…womp womp. The good news is Copper Sharks are still very active in the area, so we would definitely see sharks on our dive…just not the sharks we were hoping for.

Before boarding our boat, they provided us with wetsuits and orange raincoats. We wore the orange raincoats on the boat ride out to the bay since it was a little chilly and there was some spray. Once we arrived at the dive spot, the guides started throwing out chum and using bait to lure the sharks while we put on our wetsuits. Then it was shark time!

We jumped into the cage donning our wetsuits and snorkel masks while the crew baited the sharks with extra chum and roped bait. The water was wicked cold–poor Drew’s lips and fingers were turning blue! In no time at all, we had multiple Copper Sharks sniffing around the cage pursuing the bait. The crew would tell us which sides of the cage to look for sharks and when to go under the water, so it made spotting the sharks underwater very easy and ensured we were able to make the most of the experience. 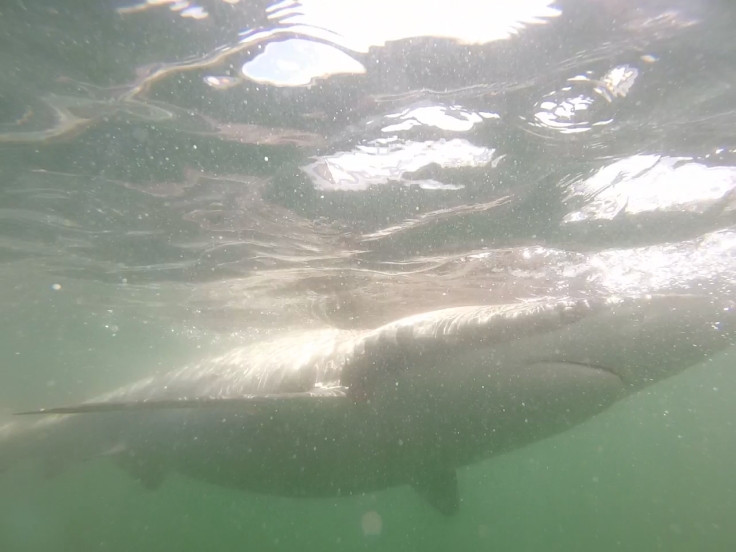 We spent 20 minutes in the cage before we had to relinquish our spots to the next groups. However, they provided opportunities for you to get back in the cage later during the session if you wanted to.

After the cage diving, we went back to Marine Dynamics’ offices where they treated us to a tasty, complimentary lunch and showed us some of the footage captured by their videographer and photographer during the excursion.

Overall, we had a blast and it was an exciting way to kick off our honeymoon! Drew was initially nervous about swimming with the sharks, but once we were in the water he had a blast. If you’re looking for something unique to do while visiting Cape Town, I highly recommend cage diving with sharks in Gansbaai. Maybe you’ll luck out and see a Great White!

4 thoughts on “Cage Diving with Sharks in Gansbaai, South Africa”

I’m Kathleen, an adventurous traveler based out of Atlanta, GA who chooses to make travel a priority. Here is where I share travel stories and tips while balancing work, travel, family, and fun.